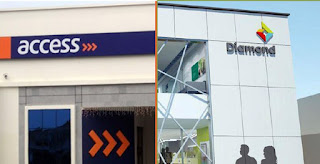 The management of Access Bank has announced that an Extraordinary General Meeting of the bank will hold in Lagos on February 1, 2019.
The meeting is scheduled to take place at Balmoral Convention Centre, Federal Palace Hotel, Ahmadu Bello Way, Victoria Island, Lagos at 10.00 a.m.
A notice sent to the Nigerian Stock Exchange by the bank said concerns surrounding the planned acquisition of Diamond Bank will be part of the resolutions to be considered and passed at the meeting.
The disclosure, signed by Sunday Ekwochi, the Company Secretary, added that shareholders would also deliberate on plans to increase the bank’s Authorised Share Capital from N20 billion made up of 38 billion ordinary shares of 50 Kobo each and two billion preference shares of 50 Kobo each to N35 billion by the creation of 30 billion ordinary shares of 50 kobo each.
The disclosure read in part: “That pursuant to the Memorandum of Agreement executed between Access Bank PLC and Diamond Bank PLC on the merger of the two entities, if the Rights Issue contemplated in Resolution 2 is undertaken prior to the Implementation Date of the merger, the Directors of Access Bank be and are hereby authorized by way of a Placing and subject to obtaining all requisite regulatory approvals, to offer to Diamond Bank shareholders shares in Access Bank to be purchased after the Implementation Date on the same term as the Rights Issue and in the same proportion that they would be entitled to as if they had already become shareholders of Access Bank.
“That the Directors be and are hereby authorised to appoint such professional parties and advisers and to perform all such other acts and do all such other things as may be necessary to give effect to the above resolutions, including without limitation, complying with the directives of any regulatory authority.”
Among other details, the disclosure said a member entitled to attend and vote at the Extraordinary General Meeting is entitled to appoint a Proxy in his/her stead.
“A Proxy need not be a member of Access Bank PLC,” it said. “To be valid, a completed and duly stamped proxy form must be deposited at the office of the Registrar, United Securities Limited, Plot 09, Amodu Ojikutu Street, Victoria Island, Lagos not later than 48 hours prior to the time of the meeting.
The management of Access and Diamond banks officially announced their proposed merger on December 17.
A statement by Uzoma Uja, the Diamond Bank’s Secretary/Legal Adviser, said the transaction will be completed by the first half of 2019.
The proposed merger would involve Access Bank acquiring the entire issued share capital of Diamond Bank in exchange for a combination of cash and shares in Access Bank via a Scheme of Merger,” the disclosure, sent to the Nigeria Stock Exchange, said.