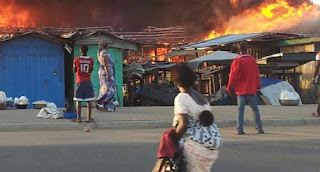 Parts of the main market in Minna, Niger State, otherwise known as Abdulkhadir Kure Ultra Modern Market, was yesterday gutted by fire, with wares in no fewer than 70 shops burnt down. It was gathered that the fire gutted shops where clothing materials, palm and groundnut oil are being sold in the market. While the real cause of the fire is yet to be ascertained, the intervention of the men of state fire service helped to curtail the fire from extending to more blocks of shops and about midday, the fire in the market was controlled. It was observed that security agents were at alert to ensure that hoodlums did not capitalise on the incident to loot shops. Some of those whose shops were gutted by the fire were seen scampering around to see what they could salvage from the debris of the fire. The victims told journalists that they had kept cash in their shops with the intention of going to the bank to deposit before the incident occurred. Chairman of the Kure Market Traders Association, Alhaji Yusuf, who is also one of the victims, disclosed that he lost a completely loaded truck of palm oil, about 400 gallons, worth N10, 000 each making a total of four million naira (N4, 000,000). According to him, preliminary assessment carried out, estimated the loss to N800 million, saying that it could be more as many people also lost cash. Niger state governor, Abubakar Sani Bello, in a statement issued to the media from his office sympathised with those who lost their wares. Governor Sani Bello said all temporary shops would be relocated to avoid future occurrences. “We will work together with the market committee to ensure fire outbreaks are curtailed,” he assured.