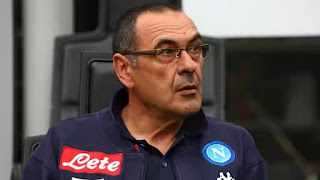 Chelsea manager, Maurizio Sarri has provided latest update on Olivier Giroud, Willian and Pedro Rodriguez’s injuries ahead of his side’s FA Cup third round clash with Nottingham Forest on Saturday. Giroud has been out of action since limping off against Crystal Palace last weekend in the Premier League. Willian picked up an injury on Wednesday night in Chelsea’s 0-0 draw with Southampton, while Pedro has been injured for some while. Sarri was quoted by Sport Review as saying: “I think it’s better than what I thought after the Crystal Palace match. The doctor told me in 10 days Giroud will be able to train.” Sarri added: “I don’t think Willian’s injury is very serious. “And the report from the doctor is not serious for Pedro, I think in one week he will be able to train with his team-mates.”