The US military has deployed soldiers to Gabon amid fears of violent protests in neighbouring Democratic Republic of Congo after its presidential election.

US President Donald Trump told Congress on Friday that the first of about 80 troops arrived in Gabon on Wednesday to protect US citizens and diplomatic facilities should violence break out in DRC’s capital Kinshasa Voters in Congo went to the polls on December 30, two years after they were first scheduled to be held, to elect the successor to President Joseph Kabila, who has been in power for 18 years.
The first of these personnel arrived in Gabon on January 2, 2019, with appropriate combat equipment and supported by military aircraft,” Trump’s letter to Congress read.“Additional forces may deploy to Gabon, the Democratic Republic of the Congo, or the Republic of the Congo, if necessary for these purposes.”
“These deployed personnel will remain in the region until the security situation in the Democratic Republic of the Congo becomes such that their presence is no longer needed,” the letter continued. Congo’s electoral commission is scheduled to release the provisional results of the presidential election on Sunday, but it has said there could be delays because of the slow arrival of tally sheets. 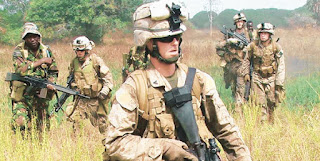