Ifeanyi Umere, the Senior Special Adviser to the Abia state Governor on Orientation, has exonerated his principal, Governor Okezie Ikpeazu, from the military invasion of the Umuahia residence of the leader of the Indigenous People of Biafra (IPOB), Nnamdi Kanu.

He insisted that the President Muhammadu Buhari-led federal government and the Nigeria Army should be held responsible for the September 2017 military onslaught on the residence of Kanu.

Umere, a chieftain of the Peoples Democratic Party, PDP, in Abia, made this known in an interview with newsmen in Umuahia, on Tuesday, following the continued attack on Governor Ikpeazu by Nnamdi Kanu, recalling that the state government was at the forefront of the clamour, which ensured his release from prison.

DAILY POST recalls that the IPOB leader, Nnamdi Kanu had urged his followers to scatter any gathering of Ikpeazu’s campaign team, to serve as a reprisal over his (the governor’s) alleged role in the military invasion of his Afaraukwu Umuahia residence on September 2017.

His words, “I want to remind every conscientious followers of the development that when Kanu was incarcerated, the Abia state government consistently called for his release, always in the media calling for his freedom.

“Those who are conscious of the happenings around you, should check our comment on media. We consistently called for his release. So, is Governor Ikpeazu working against Nnamdi Kanu’s aspiration and intent? We were in the front line calling on federal government to free him.

“Nnamdi Kanu’s major grudge against Governor Ikpeazu is the fact that he (Kanu) said the governor mobilized the Nigerian army to invade his house. And I want to also ask, as the governor of Abia state, Nnamdi Kanu is very conscious and aware of the fact that Ikpeazu does not control the military.

“Buratai and his men who came here, came on their own, under the instruction of the Commander in-Chief of the Nigerian Armed forces who is the President, Muhammadu Buhari directly.

“Let me put in this record, we consistently called for his release. Why does those who are today, hallucinating around him, could not say a word out of cowardice. Now, I am still in tandem that the attack on his house was irresponsible. It was uncalled for. It was an invitation to anarchy.

“The governor did not propose proscription. It was the prerogative of the President who have remained adamant in seeing reasons in Nnamdi Kanu’s agitation.”

“Using the logic that the governors are against him, Governor Ikpeazu particularly is uncalled for. Buratai is responsible for every attack on Nnamdi Kanu. The governor did not deploy the army to invade Kanu’s home,” Umere said. 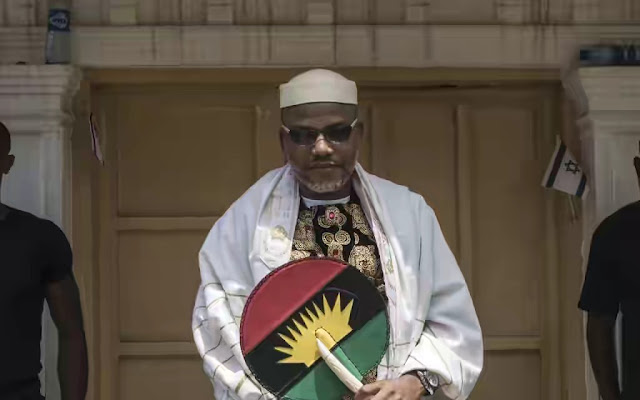