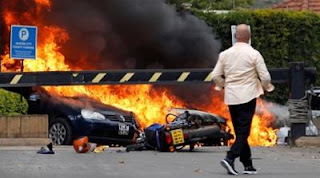 explosions and gunfire were heard at an upscale hotel complex in Nairobi, Kenya’s capital, on Tuesday afternoon, according to witnesses and police.

The attack on the Dusit hotel complex – which also houses offices and banks – sent people fleeing for their lives, black smoke rising from the scene.

“We are under attack,” a person in an office inside the complex told the Reuters news agency.

“It is terrible. What I have seen is terrible. I have seen a human as I ran out and there is what looks like minced meat all over,” said one a man who said he ran from the scene. He did not elaborate further.

Gunfire continued several minutes after the first reports. A bomb disposal unit was on the scene and vehicles were being cordoned off for fear that they contained explosives.
“A group of unknown armed assailants attacked the Dusit Complex in what we suspect could be a terror attack,” Kenya police chief, Joseph Boinnet, said.
There could still be armed assailants in the building and the police operation was ongoing, he told reporters in a short briefing.
Al-Shabab claim responsibility
Somalia-based armed group al-Shabab claimed responsibility for the attack, saying that it was ongoing.