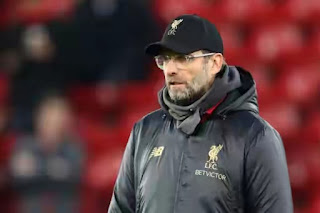 Liverpool manager, Jurgen Klopp has said that defender, Trent Alexander-Arnold might play against Crystal Palace on Saturday despite picking up an injury.

It was feared that the 20-year-old would be sidelined for up to a month, having needed to strap up his ankle and take painkillers prior to playing against Brighton last time.

However, Klopp has revealed that both Alexander-Arnold and fellow injury concern Georginio Wijnaldum will face late fitness tests.

“Gini and Trent, we will decide day by day. It’s of course not cool,” Metro UK quoted Klopp as saying at his pre-match press conference.

“The exceptional part of that story is that they both played 90 minutes [at Brighton]. The whole world saw what happened to Trent, what a boy, unbelievable.

“We played the game and afterwards, we got the information that he had [an injury].

“Nothing happened during the game, it was all stable and good.

“It was just what happened before the game; adrenaline is obviously an interesting thing, it gives you the opportunity to do a bit more than you would expect. We will see.

“For both, it will be really, really close for tomorrow. I don’t want to close any doors before anybody tells me I have to.”