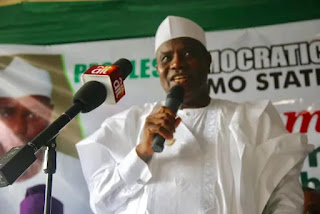 Governor Aminu Tambuwal of Sokoto State on Saturday called on Nigerians to vote leaders that will protect and secure Nigeria’s future in the forthcoming 2019 elections.

Tambuwal, who is also the Peoples Democratic Party (PDP) governorship candidate in Sokoto state made the call while addressing party faithful at a campaign rally in Tureta town, Tureta local government, NAN reports.

According to him, “Nigeria can only secure its future if the people elect leaders that have the mindset of securing the country’s dreams.

“It is my sincere call on all Nigerians to vote leaders that will ensure that the dreams of our founding fathers are achieved,” he said.

Tambuwal further noted that his administration had implemented laudable progammes and laid the foundation for infrastructural and human development.

He restated his administration’s commitment to ensure more improvement in the education, agriculture and health sectors if re-elected in the forthcoming election in the state.

Also speaking, former governor of the state, Attahiru Bafarawa called on the people to support all PDP candidates in the state.

Likewise, former Deputy Governor, Mutari Shagari and the PDP Campaign Chairman in the state, Bello Sulaiman separately called on the electorates to consider candidates based on their records of achievements.