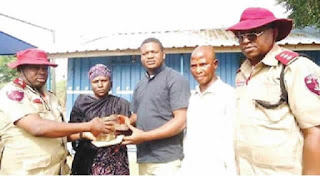 The Kano State Sector Command of the Federal Road Safety Corps has returned the sum of N430,000 to an accident victim in Kano.

The money was recovered at the scene of an accident along the Bayero University Road, Kano, when the victim, who is a staff member of the university, was knocked down by a hit-and-run driver in the Rijiyar Zaki area on Friday.

The victim was on his way to work when he was knocked unconscious and was rushed to the hospital.

The command Public Relations Officer, Mr Kabir Daura, said that the money was recovered by the FRSC officers, who rushed to the scene after learning about the accident.

In a statement issued on Sunday, the FRSC spokesman said the victim survived the accident.

He said, “The money was recovered by our officers, who were at the scene of the accident; immediately we were informed about the crash, we rushed to rescue the victim.

“The money was handed over to the owner, who was the motorcyclist and the only injured person in the accident, in the presence of his relatives and other people.

“Our patrol team arrived the scene immediately and rushed the victim to the Murtala Mohammed Hospital, while the money, contained in a polythene bag, was taken to our Kano State command headquarters.”

Daura added that the money was later handed over to the victim on the instruction of the Sector Commander, Alhaji Yusuf Garba.

“The sector commander also called on motorists in Kano to always exercise care while using the roads to avoid similar occurrences,” he said.