The striker and his pilot were in the plane that vanished on Monday night on his way to Cardiff.

Sala was heading to the Welsh capital aftersigning for the Bluebirds from French club Nantes in a £15m deal.

The single-engine plane left Nantes, north-west France, at 19:15 on Monday and had been flying at 5,000ft (1,500m) over the Channel Islands when it contacted Jersey air traffic control requesting descent.

It lost contact while at 2,300ft (700m) and disappeared off radar near the Casquets lighthouse, infamous among mariners as the site of many shipwrecks, eight miles (13km) north-west of Alderney.

Police said the search to find the Argentine striker, 28, and Mr Ibbotson, from Crowle, Lincolnshire, was ongoing.

The pilot of the Piper Malibu aircraft has been named a Dave Ibbotson, a 60-year-old British father of three.

Sounding conversational and jokey, he said he was “so scared”.

“At this time of year the conditions out there are pretty horrendous if you are actually in the water.” 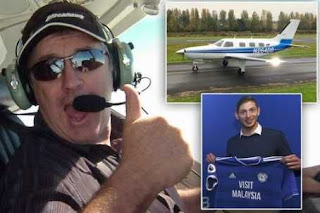