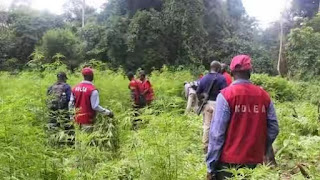 This was stated in a press statement signed by the command’s Public Relations Officer, Mr Ikechukwu Emmanuel issued to DAILY POST. He said 593 suspects were arrested, four female, 589 Male and 102 others were convicted within the year under review.

He explained that the suspects were apprehended in connection with the use, possession and selling of illicit drugs and cannabis and other related offences.

He said the command had succeeded in the obtaining of 465.87 kg of exhibit out of which 165.79kg are Cannabis Sativa and 300.08kg are psychotropic substances.

Ikechukwu added that a total of 207 drugs users were referred for counselling within the year under review.

He reassured of the command’s readiness to continue fighting the menace in order to have a free illicit drugs society.