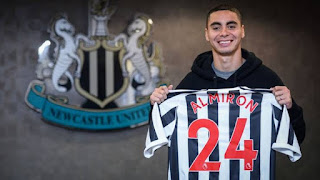 Newcastle have broken their transfer record to sign Paraguay playmaker Miguel Almiron from MLS side Atlanta United for around £20m.
It breaks the previous record of £16m that was paid to Real Madrid for Michael Owen in 2005.
Almiron, 24, scored 13 goals last season as Atlanta won the MLS Cup for the first time.
The attacking midfielder previously played for Cerro Porteno in his home country and Argentina’s Lanus.
He has scored 21 goals in 62 league appearances over his career.
“I’m very happy and eager to start and to meet my new team-mates,” he said. “The league is very competitive, this is a historic club, and Rafa Benitez himself were the main reasons why I am here now.

“I know that Newcastle is a big and historic club. “I know that the people here really love football and that the fans are really behind the team,” he said.